Hyper Japan 2012 Christmas, the fourth outing for the U.K.’s biggest celebration of culture and cuisine, took took place on the weekend of 23rd-25th November 2012 in London’s Earl’s Court. As part of its activities, Eat-Japan’s popular food and drink area at the event included an exclusive Japanese sake-tasting demonstration , the “Sake Experience 2012”. This was a big success, with a grand total of 665 people having attended by the time the curtain dropped at its close on the third day.

The aim was to convey the enjoyment of tasting sake through the four experiences of “Try, Learn, Vote and Buy”, with ten brewers coming to London from all over Japan, from Iwate in the north all the way down to Kagawa in the south; they brought between them a variety of twenty-one different sakes, such as sparkling, unfiltered(muroka), undiluted (genshu) and aged (koshu), and presented them at a range of temperatures and in different styles, such as heated, chilled, on the rocks and so on.

In addition to all this, Natsuki Kikuya, Head Sake Sommelier at London restaurant Roka, held over the course of the weekend a number of mini-lectures in which she brought all the participants’ enjoyment of sake yet another step further, by demonstrating such things as how to prepare and drink varying types of sake hot. 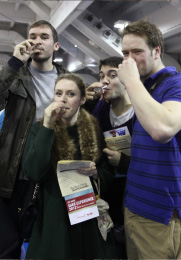 Following the tasting, visitors were able to buy the sake they liked most at the Eat-Japan Shop, which sold, over the three days, a combined total of 500 bottles; many were pleased to be able to have an alternative, refreshing option for Christmas presents!

All Participant Sake Brewers and their Sake Entries

A delicate, juicy nose of fresh florals, peach and honeydew, moderate acidity faultlessly balancing smoothness and sharpness with a long finish. Delicious with scallops ceviche or carpaccio.
Winner’s Comment: “The patrons’ surprised faces on first tasting Dassai 23, their exclamations of ‘Delicious!’, their coming back to our booth to say ‘this is the tastiest’, their requests for ‘one more, please’ all delighted us. We are grateful that our sake, made to be dubbed ‘delicious’, has bridged the UK/Japan cultural gap. Lastly, thank you to everyone who queued for so long. Thank you so much.”

Perfect Sake for a Gift

12 years in tanks and oak barrels give this koshu (aged sake) its eponymous, warm colour and sweet, spicy aroma; a perfect companion to desserts, cheeses, foie gras, roast lamb.
Winner’s Comment: “It’s truly an honour that our sake has been voted the ‘Perfect Gift Sake’ by such tasteful European patrons. Henceforth, we will aim daily to be the best, and strive to create sake that will satisfy people across the world.”

The lactic acidity emblematic of the traditional kimoto technique imparts a banana and candy nose and a smooth sweetness on the palate, perfect for main courses, deep-fried food and cheeses.
Winner’s Comment: “Winning this award inspires us to want to make increasing efforts to delight our patrons with sake that combines exquisitely not just with the cheese that was tried at the Sake Experience, but also various British foods.”