The Sake Cocktail Awards are a rare opportunity for visitors to watch a selection of professional mixologists shake up original cocktails right in front of them, which they then have the opportunity to sample. A winner is crowned at the end of each day, based on visitors’ votes. Adding a variety of mixers and ingredients – both familiar and new – to a Japanese sake base, these original cocktail creations will redefine sake drinking. The Sake Cocktail Awards aren’t just interested in finding the “best overall” sake but rather the best combination for a particular situation. Be it a New Year’s Eve celebration or a pre-theatre drink, rest assured the ideal cocktail will be found!

Enjoyed in Japan for thousands of years, sake is an indispensable part of Japanese life and culture to this day. Outside of Japan, chefs and mixologists are experimenting with mixing different types of sakes (from Junmai to Daiginjo) with western flavours, using these various sakes as a fresh, new cocktail base. According to Oliver Hilton-Johnson, Director and Sake Specialist of Tengu Sake and Sake Educator for the British Sake Association, “Whilst the UK consumer is spoilt for choice when it comes to the selection of alcoholic drinks on offer, few are quite as versatile and rewarding as sake. Which other alcoholic drink can be both cool and refreshing as well as warm and invigorating? Great with sushi but also cheese? HYPER JAPAN will allow visitors to try sake in a familiar environment by sampling a variety of amazing sake cocktails.” 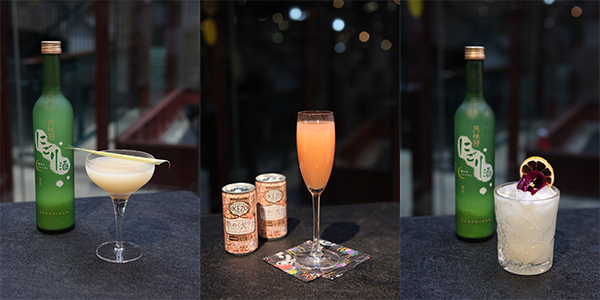 The competing mixologists are a diverse assortment, including Japanese sake experts and award-winning London talent. Each day will feature three different contestants, so every Sake Cocktail Awards visitor gets to sample three exciting sake-based drinks!

Visitors can also purchase the sake used by the participating mixologists at HYPER JAPAN’s sake shop, just next to the awards area.

A light, refreshing, and delicately sweet blend of yuzu citrus and sparkling sake. With intense aromas of yuzu marmalade, crystallised tangerine zest, and honey. The perfect preprandial for all Bellini lovers.

The history of Ozeki dates back to 1711, when it began to brew sake in the Imazu area of Nada in Hyogo, making the most of the mineral-rich local spring water. Over three centuries later, the brewery connues to pursue innovaon while upholding tradion.

Made with the tradional kimoto method. This method enables the yeast and lacc acid bacteria in the yeast starter (shubo) to work well to produce a unique complex and concentrated, yet smooth and elegant texture.

Nigori means ‘cloudy’ and this style of sake is thicker and creamier in texture, with a milk-like appearance. The ‘cloudiness’ comes from the rice sediment that remains aer passing through a special coarse-mesh filter. Sweet, medium-body, hints of honey and tropical fruit, with a long finish.

Gekkeikan was established in 1637 in the Fushimi district of Kyoto, where the water is as crisp and delicious as the natural surroundings are beauful. Today, Gekkeikan sake, brewed in me-honoured tradion, is enjoyed by drinkers in more than 50 countries worldwide.