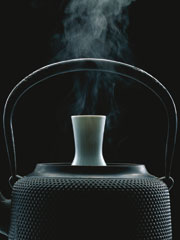 One of the questions that sake sommeliers get asked a lot concerns the temperature at which sake should be served. Is a hot steaming cup the way to go, or an iced chilled glass?

To many experiencing sake for the first time, one of the drink’s most novel aspects is that it’s frequently consumed warm or hot. Traditionally, sake was always served heated in Japan but in the past 30-40 years or so, things have begun to change slightly, with more and more sake being served at below room temperature.

This development is not only due to changing fashions but also to fundamental improvements in production processes over the latter half of the twentieth century. Many sakes, and in particular the ginjoshu varieties that didn’t really exist forty years ago, now have much more delicate and refined flavours and aromas, which can sometimes be lost if the drink is heated. Most sakes used to be much rougher, fuller, sweeter and woodier, and as such were well suited to warming.

Whilst the only way to find your preferred serving temperature for a particular sake is to experiment, sake experts have placed different categories of sake into three basic ways of serving the drink to help guide you. These are kan or heated sake (also known as o-kan or kanzake),hiya, which refers to chilled sake, and thirdly sake which is served at room temperature.

Much of today’s sake is still served warm or hot, partly because heating can mask unpleasant aspects of the flavour of the drink and make it more palatable; something which is often necessary in the case of the cheapest futsushu (regular sake). Premium sake on the other hand, with its more delicate character and subtle aroma, is not generally recommended for heating to high temperatures. One exception to this is honjozoshu, which is premium sake that has had a limited amount of brewer’s alcohol added, and can have a lighter and smoother flavour when warmed. Both this andtokubetsu, or ‘special’, honjozoshu are thus suitable for serving at up to around 50 degrees Celsius. They may even be served at the highest serving temperature at about 55-60 degrees Celsius, without much of a detrimental effect on flavour. Heating any higher than this level though, is generally not recommended for any sake as the subtleties of flavour are lost, and the taste of alcohol becomes overpowering.

Junmaishu (pure rice sake) can be warmed to about 45 degrees Celsius, while junmai ginjoshu may be enjoyed at a lukewarm level of about 40 degrees Celsius. The only other type of premium sake conducive to heating is taruzake, which is sake that has been stored or aged in a cedar cask. This may be served at up to the temperature level known ashinatakan, which roughly translated means ‘as warm as being left out in the sun’.

Sake experts generally agree that most premium sake is best served chilled, with the optimum level for ginjoshu, daiginjoshu, junmai daiginjoshu and unpasteurized namazake considered to be suzuhie or ‘cool’, at around 15 degrees Celsius. This is the temperature at which the subtle flavours and fine fragrances of these refined sakes can be best enjoyed. They may be chilled further, to hanahie (‘flower temperature’) oryukihie (‘snow-temperature’) levels, however excessive chilling may dull the senses of taste and smell, and the subtleties of flavour and fragrance will be lost. Namazake, because it’s unpasteurized, must be stored at below room temperature, and should never be warmed or heated. It can generally be served colder than other types of sake, with either suzuhie or the slightly colder hanahie being considered ideal.

This third option for serving sake is in fact one of the most versatile. It’s recommended for all but the highest quality ginjoshu and daiginjoshu, but even these may be served at room temperature without there being a detrimental effect on flavour, aroma and overall enjoyment of the drink.